Atlas (or before arriving in Barataria)

That man and his companion.

A journey of beginnings to nowhere.

The portrait of two that are one and the same, only one.

“This trip I’m making for you.

The dream which nourishes this journey is truthful.”

Atlas is a show directed by Pep Ramis and María Muñoz, co-directors of Mal Pelo. Their shared work has already produced over 25 performances and is one of the distinctive features of the group. They are both also responsible for the design of the scenery. The core of the team will be made up of some of the habitual collaborators of Mal Pelo.

The performers for this piece will be Pep Ramis himself, along with Jordi Casanovas, performer and dancer who has participated in various pieces since 1990. Their combined experience on the stage and great recording ductility, guarantees a high level of quality and profundity in the creative process. Jordi Casanovas knows the group’s language well, how they construct the spectacles and the imaginary qualities of Mal Pelo.

For more than 15 years, Mal Pelo has consistently created a language which has had an intimate and human tone, not lacking in humour, which gives its work a closeness to the public and facilitates its communication. It is a language which starts off as a study of movement, but includes a dramatic construction that brings to life the delivery for the audience.

The references of departure in the creation of Atlas have been the study of the book ” Cuerpo y gesto en el Quijote de Cervantes” (Body and gesture in the Quixote of Cervantes) by Bénédicte Torres, and Orson Welles’ unfinished film “Don Quixote”, as well as the idea of a shared journey to nowhere. This journey, dealt with in so many works of literature, provides us with a setting for enquiring into the relationship between two men.

After numerous readings, we have selected the study “Cuerpo y gesto en el Quijote de Cervantes” written by Bénédicte Torres, professor at the University of Lille, member of the Centre of Investigation of Spain in the centuries XVI and XVII at La Sorbonne-Paris III and member of the Cervantists Association.

This study is a profound reflection of how the protagonists of Cervantes’ work find themselves in the heart of the text and how it is possible to perceive it in the script. They put themselves forward as the place where the tensions between the imitation of the literature and the reality take place.

Starting with a dramatic setting with two characters, with two actors on stage, we do not endeavour to make a representation of the two characters in Cervantes’ work. Instead we try and show the contrast between the actual presence of the actors and an artful world in which both can be the same character and that together they build a polyhedral vision of a character and a complex body.

The choice of Pep Ramis and Jordi Casanovas as actors for this piece is crucial for this semantic act, for their acting qualities, for their movement and for their shared experience in scene creation.

As in previous Mal Pelo work, starting from solid references, it is the creative process that provides the choreographic and dramatic material and elaborates the piece. For this process to be successful it is very important that the two actors are closely involved in the planning of the project. The backroom arranging and editing, the sound track, the audiovisuals and the stage design, all complement the dramaturgy.

Although based on a narrative literary reference, it is impressible for us to have freedom of artistic presentation. For this reason, we do not establish a line parallel to the narrative and at times we present it in succession and at times in contrast. We make use of the nature of the theatre and dance in order to alternate the spoken word with non spoken explanations. In this way, we get closer to the vision of Quijote that Bénédicte Torres proposes in his essay.

Michel Foucault says of Don Quijote: “His adventure will decipher the world: a meticulous journey to highlight, over the entire earth’s surface, the figures that demonstrate that the books explain the truth. The feat has to be verified: not consisting of a real triumph, but transforming reality”.

DESIGN AND CONSTRUCTION of the scenography: Ben Heinzel-Litchwark.

THANKS TO: Bénédictine Torres, Pep Pujol.

ATLAS (or before arriving in Barataria) opened the 29th. Barcelona Summer Festival, Grec, from 14thto 16th. July in el Mercat de les Flors in Barcelona. A Mal Pelo, GREC 2005 and Cervantes Institute production. With the collaboration of Teatre de Salt. 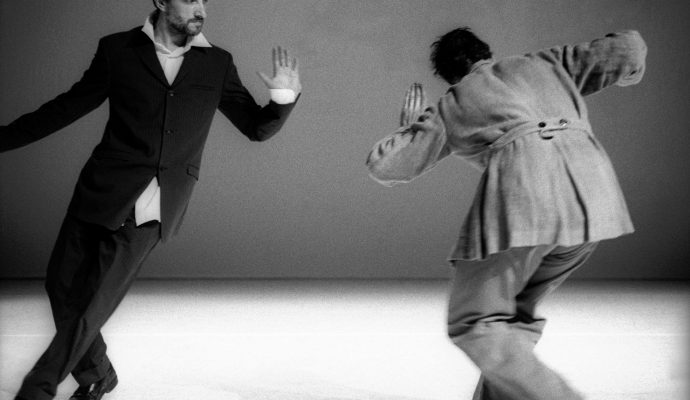 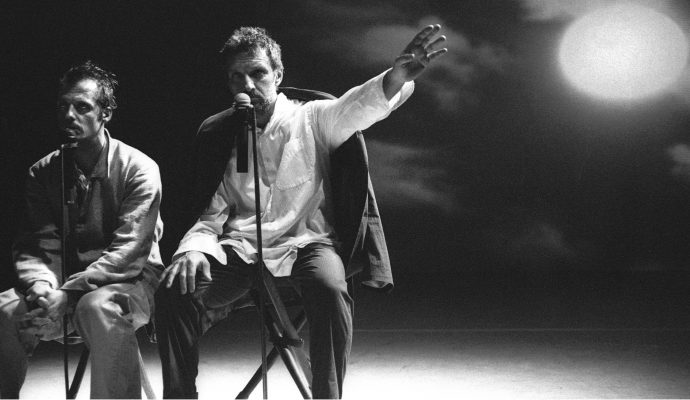