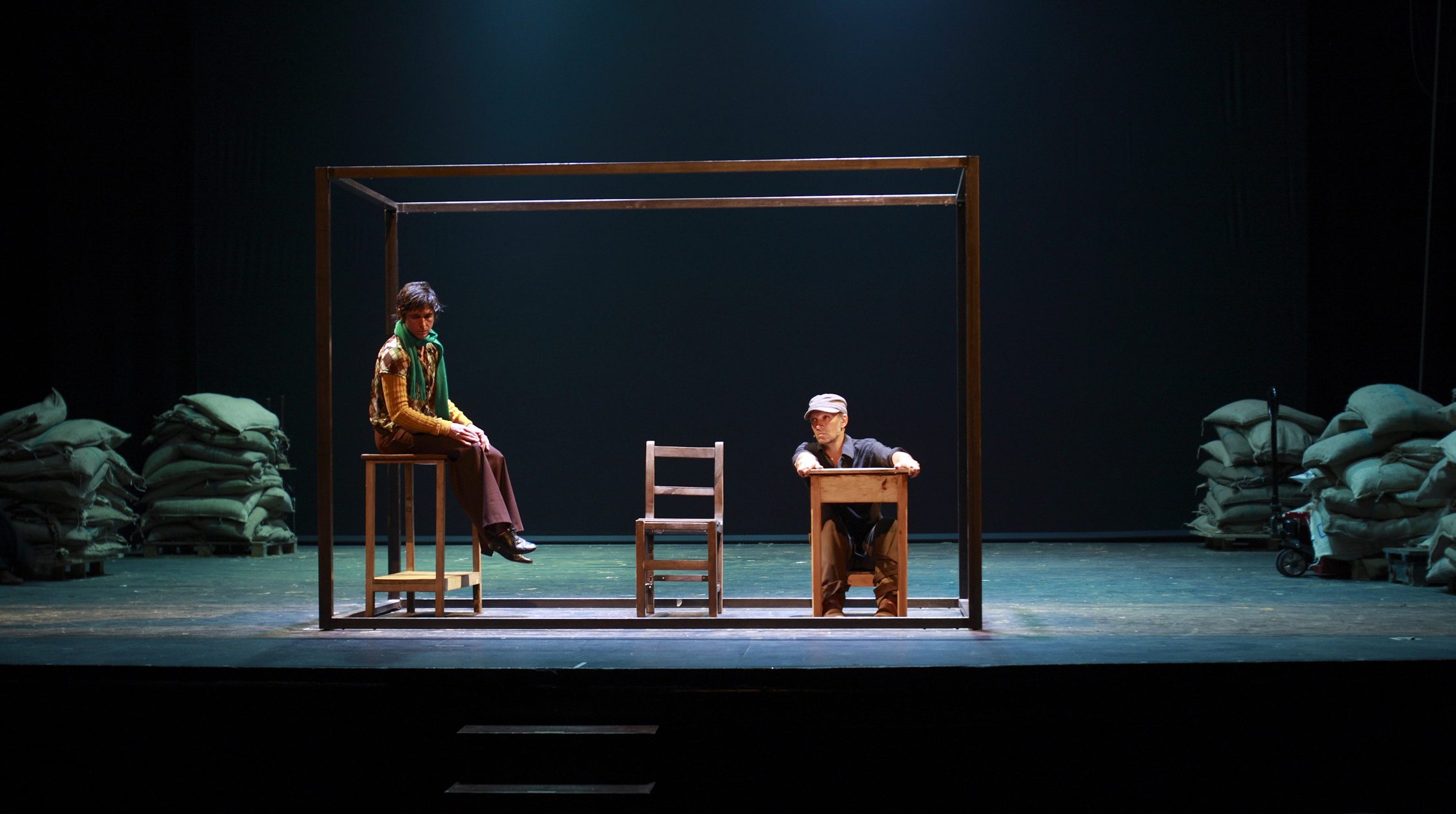 So begins one of the letters that make up John Berger’s latest book, From A to X.

The manuscript of this book, sent to María Muñoz and Pep Ramis, served as the basis for the show I’ve Seen Horses.

After using his texts in previous shows, Behind the Eyes/2002 and Testimony of Wolves/2006, Mal Pelo has once more had the writer’s help in defining the ideas they take as their starting point.

The poem I’ve Seen Horses looks at the relationship between a man and a woman whom life has separated against their wishes.

Written in movement, words and a particular use of light, video and sound, the poem, inspired by the correspondence between them, speaks to us of love and resistance.

The images of horses appear as a metaphor of freedom, a metaphor for the secret these separated beings need to construct in the distance.

We tend to think that secrets are small, don’t we? But there are also vast secrets and it is precisely because they are so vast that they remain hidden, except for those who attempt to embrace them. These secrets are promises.

The title of the show comes from a poem by John Berger in which he writes: “I’ve seen horses in two places at once.”

You, in your cell, cannot cover any distance except the tiny ones you repeat every day. But you think, and in your thoughts you cross the world. I can go wherever I like, covering distances is part of my life.

Your thoughts and my journeys, my love, are almost the same thing.

In our minds, you and I seek a way to escape our days, which are so often dark. We try to find the infinite in every minute.

The word “recently” has changed since they locked you away.

This new piece of work gives voice to two poems by the Palestinian writer Mahmoud Darwish, who generously allowed us to work with them during the creation process.

We now dedicate I’ve Seen Horses to his memory.

ONE SQUARE METRE OF PRISON
The door, and beyond it the paradise of the heart. Our things—and everything is ours—are growing hazy. And the door is a door, the door of metaphor, the door of legend. The door has no door, yet I can enter my outside and love both what I see and what I do not see. All these wonders and beauties on Earth, and yet the door has no door? My prison cell accepts no light except into myself. Peace be unto me. Peace be unto the sound barrier. I’ve written ten poems in praise of my freedom, here and there. I love the particles of sky that slip through the skylight, a metre of light where horses swim, and little things about my mother… I’ve written twenty poems insulting the place where there is no place for us. My freedom is to be how they don’t want me to be. My freedom is to enlarge my prison cell, continue my song of the door. A door is a door, there is no door in the door yet I can walk out inside myself, and so on.

Fragment from “One Square Metre of Prison” by Mahmoud Darwish.

Voice off in the show by Abdel Assis.

Mal Pelo now presents a new show, I’ve Seen Horses (He visto caballos), a duet by María Muñoz and Pep Ramis, the third of the series begun by Quarere/1989 and L’animal a  l’esquena/2001 (The Animal on Our Back). In this piece we will be able to see the development of artistic language in the latest shows, by the directors of the group.

“Words have to do with the tactile,” said John Berger at a meeting with his readers […] in Girona. Words go hand in hand with touch because they are aimed at what they signify, they move towards it to touch it; and we are not only flesh of our mothers’ flesh, our first words, too, are born of carnal contact with language. The meeting took place one afternoon at the end of May, after a rehearsal of I’ve Seen Horses, a piece on which María Muñoz and Pep Ramos have collaborated once more with the British writer. That afternoon the author of Pages of the Wound, a lucid and necessary reflection on time and space, the conditions of sensibility, spoke as viscerally as he does in his books.

The backbone of Mal Pelo’s creations is their search for the link between seeing and living, giving form to their images through movement and words, video and sound, in a continual overlapping of languages. This does not mean that the narrative is linear or obvious: on the contrary, it means that there is a clear purpose to the action.

The time of I’ve Seen Horses is one of a contained attack of images, music, bodies, sound, beats, caresses and blows, retreating before they enter a wood from which there may be no way back. I’ve Seen Horses is a story of uprooting, of memory that becomes a presence. Where does one body end and another begin? How does a body remember the absence of another? Against the shadows of the world, imagination, the voice of poetry and the bodies that wander the woods at night are slowly weaving the paths home.